After 20 years, CSGRT Rangers are still discovering new things taking scientific knowledge forward about our globally rare grey seals. Lucky bunting was just 2/3 years old when she was entangled in lost trawl net, so Sue Sayer contacted British Divers Marine Life Rescue and on 12/07/16, Dan Jarvis led a rescue enabling Sue to cut Bunting free and releasing her back into the wild. Click here to read her original story. Within 30 days, CSGRT identified Bunting fully healed and 17 months later she was 40 km away looking massively fat, fit and healthy. 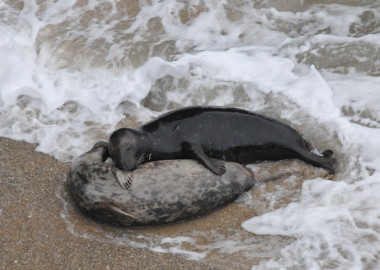 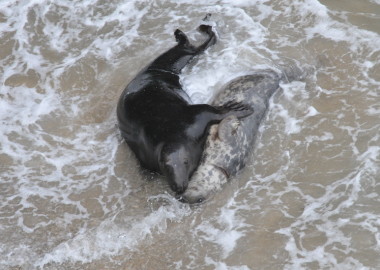 As if not enough, this winter she taught us something new about seal behaviour. On 01/12/18 aged 4/5 Bunting was photographed by Craig Ashley play mating for the first time with a young male ‘Fish Neck’…her first boyfriend! 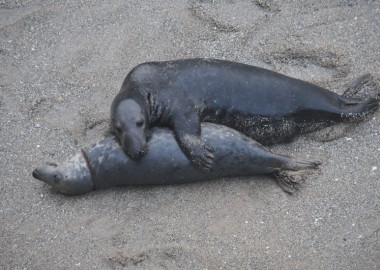 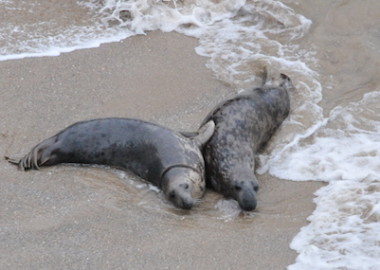 Just four days later, Craig spotted her again – play mating with boyfriend 2, then two weeks later she had boyfriend 3 and within a month we were surprised to find her with boyfriend 4! 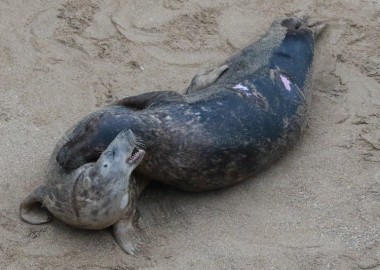 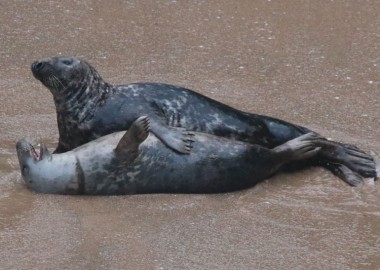 Boyfriend 5 was a well-known, easily identifiable male ‘3 scars’ and his lucky day was photographed by Andy Rogers, as this was Bunting’s first successful mating on 06/01/19! Surely that was it? NO! Bunting’s final, sixth boyfriend was observed play mating on 13/01/19! Whilst not surprising, we didn’t know that first time females will attempt to mate with multiple males. Whilst Bunting has now gone off our ID radar, we hope that she will have her first pup in September…let’s hope our awesome volunteer team can find out where.

Huge thanks to Craig Ashley and Andy Rogers who have made this exciting discovery possible!