We are extremely lucky in Cornwall to routinely see grey seals, a globally rare seal species only present in the north Atlantic. The UK is home to 38% of the entire world’s population based on pup production. Despite this there are still fewer grey seals in the UK than red squirrels.

On the IUCN Red List for endangered species, grey seals are protected by the Habitats Directive in the EU and the Conservation of Seals Act in the UK and have legal protection in Special Areas of Conservation and Special Sites of Scientific Interest.

Grey seals can be found all around the Cornish coast – at sea or hauled out on beaches, offshore rocks or hidden away in remote sea caves. These places are established seal hot spots routinely visited by seals as they move around the Celtic Sea.

We do occasionally get vagrant seal species visiting Cornwall, most notably hooded and harp seals.

Seals are our most easily sighted iconic marine mammal, as they haul out in predictable places, at predictable times all year round and are as nosy about us as we are with them. This makes them extremely important as ambassadorial species engaging us all with our precious marine habitat. Their huge public appeal makes them a key wildlife attraction in the southwest with locals and visitors alike. As such seals make a very positive contribution to our ever expanding recreational and tourist based marine economy. 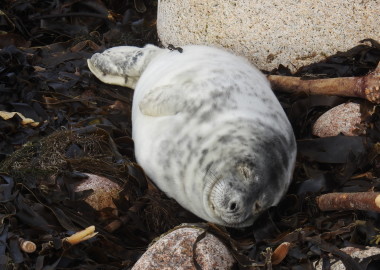 Incredibly adapted for life at sea, grey seals dive to depths of 120m (slowing their heart from a rate similar to yours to just a few beats a minute and using oxygen stored in their both their blood and muscles) they forage on the sea bed for their preferred prey species – sand eels and dragonets.

Their senses are highly developed and finely tuned:

Smell – a seal’s nostrils are closed until it uses its muscles to open them to breathe in bursts. If a seal spots you, look out for it opening its nostrils repeated to ‘sniff you out’. Seals perform sniff greetings with each other and mothers identify their pups this way, which is why it is important to not leave human or dog scent around a pup. Seals routinely sniff a beach when they arrive suggesting they may recognise familiar places this way.

Hearing – a seal’s audible range is similar to that of humans. If you can hear them, they can hear you, so it is important to only talk in whispers when you are nearby.

Sight – seals have amphibious vision. Huge eyes gather the maximum amount of light underwater, whilst pupil and cornea adaptations enable them to see almost as well in air as in the sea.

Touch – their whiskers are more sensitive than your finger tips and enable blind seals to survive in the wild. Seals will also explore objects using their mouths and flippers. 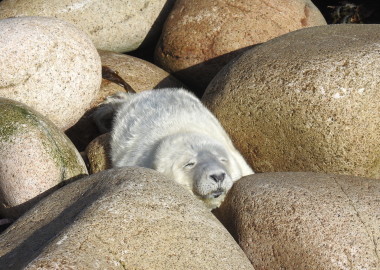