Phew! After a survey where no seals were spotted it is good to arrive at the mainland haul out, peer over the cliff and find they have returned! Just three days later the haul out had returned to normal and I was happy! After the initial count and age/sex data collection, I began taking photos and very quickly, I realised that some of the seals that at first just appeared to be wet were in fact oiled. In all five different seals were seen with oil patches on their fur. The position and appearance of the oil suggested that the seals had lain in the oil rather than surfaced in it. As seals don’t groom, heavy grade oil such as this is not likely to be life threatening, although it may have longer term skin effects and with some evidence that these seals had been scratching the oil may have been irritating their skin. Larger patches of oil are more of a problem as they affect a seal’s ability to detect prey and their thermo regulation. Oil in their eyes, ears or mouth is obviously going to be a problem too. Far worse and somewhat surprisingly, however, are the potential impacts of light grade fuel oils such as diesel. 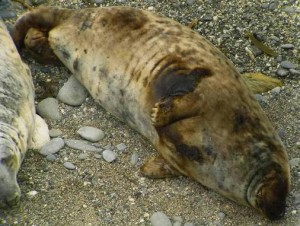 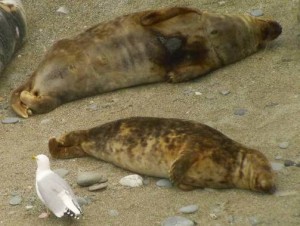 Cornwall Seal Group got evidence of this in 2009 when a fire broke out in Newquay, resulting in a diesel spill into the harbour. Despite a huge effort to minimise any impacts by the harbour authorities, Environment Agency, Atlantic Diving, Cornwall College and British Divers Marine Life Rescue, two seals did come into contact with this light grade oil on 13/05/09 – Smiles and Splash. Splash was present all day swimming and surfacing in the diesel covered water, whilst Smiles only appeared during the afternoon. Fumes from diesel can be inhaled by seals affecting their respiratory system, gut, cornea and mucus membranes and if absorbed can cause liver, kidney and brain damage. The last sightings of Smiles and Splash were consistent with them having being fatally affected by the diesel spill and dying within a few months. It is important to report all oil fouling incidents such as these to Falmouth coastguards ([email protected]) as they collate oil related reports and may build up a bigger picture of a problem out at sea.

Ouch that has got to sting – not a good place to get oil for a boy seal (left) : This female has oil all over her shoulder (right) 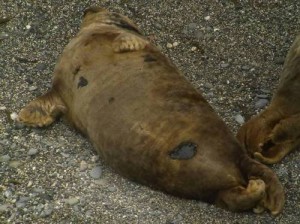 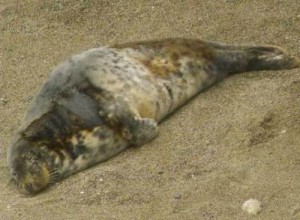 One of the oiled seals seen on the haul out had already been compromised as a result of human activity as he had been entangled in storm damaged or discarded net. Another had been helped by humans, as from his flipper tag it was obvious that he was a rehabilitated seal. After a concerted effort to photograph the tag and read its unique number his identity was finally revealed as Elvis – who is obviously alive and well and hauled on a beach in Cornwall – not a phrase that I expected to be using today! 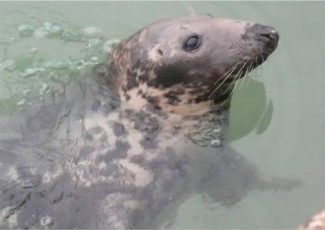