Please keep a look out!

Little did we know when we left home at 5.30 this morning for a routine seal monitoring session, that our day would be hijacked by a young female seal.

Seal surveys are governed by the tides and in the summer this means surveying as close to low tide as possible whilst still leaving enough hours in the day to process the photos, ID the individual seals present (from their unique fur patterns) and record the data. So today’s high tide at 10.40 necessitated an early start.

Right from our arrival we spotted a young female grey seal with a shawl of green trawl net hauled out on the mainland beach. She was by the water’s edge and with few other seals around her we were optimistic about a possible rescue attempt. 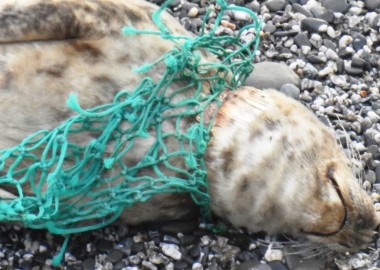 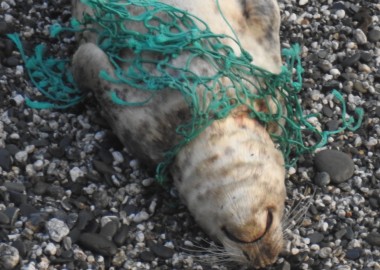 Despite the early hour, local British Divers Marine Life Rescue (BDMLR) coordinator Dave answered our text for help and as the tide was rising, it was agreed that we would continue our survey schedule and return around high tide to check to see if the entangled seal was still present. Dan and Tamara from the Cornish Seal Sanctuary were contacted and they too made plans for the seal to be treated in the field, as she was too big to retrieve for rehabilitation.

On our return, the young seal was there – lying behind a group of adult male seals (who were rather unusually present given the time of year). But within 30 seconds our delight and relief was cut short, as an adult male spooked all the other seals on the beach and the nettie disappeared! We were gutted and alerted BDMLR. The rescue team stood down. For some reason we hung around, hoping that the young seal would re-haul and its reappearance about an hour and a half later lead a rescue team of climbers and seal handlers to be re-scrambled for a rescue at 15.00. We watched nervously as the young seal moved progressively down the beach with the receding tide and our hearts dropped, as we finally watched the ‘nettie’ slip back into the sea and swim off at around 14.30. It was gut wrenching!

Still, the plan is to be out first light tomorrow and should the seal be lucky enough to be present, we’ll attempt another rescue before the volunteers head off to work! Keep your fingers and toes crossed!

Meanwhile – if you are out and about, please keep your eyes peeled….and if you spot an entangled seal (there are lots out there sadly) please call BDMLR’s 24 hour hotline 01825 765546 asap.