Admire from a distance

In Cornwall, we are hugely lucky to have a globally rare seal species around our coast. There are fewer grey seals in the World than African elephants.

Grey seals are our most reliably sighted marine mammal. Unlike all other mobile marine megafauna species, seals appear in predictable locations at predictable times, so they underpin the marine tourism economy. We need seals more than they need us, however they do need our help in the form of tough love! 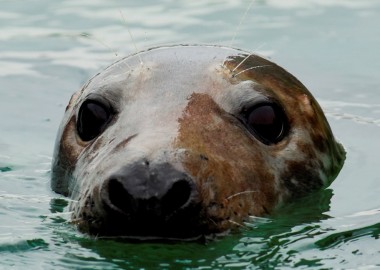 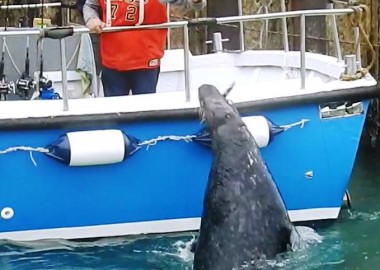 Our experience in Cornwall over many years has shown that feeding wild seals is VERY BAD for them!

The Marine Management Organisation guidance on the issue can be found by clicking here.

In St Ives in 2002, some local fishermen were directly threatening to illegally shoot and kill a seal that had been seen in and around St Ives. The seal had been attracted by fishermen actively selling fish to tourists on the harbourside and encouraging the seal to follow their boats by discarding unwanted fish scraps overboard.  The difficult decision was taken to relocate the adult male (known as Alfie). Despite helicoptering him to Lundy Island off North Devon, Alfie swam back to St Ives within three weeks and soon after disappeared altogether, so we can only imagine what may have become of him.

Ever since CSGRT have been actively campaigning to raise awareness about this issue by providing leaflets with general information on seals in Cornwall and more specific ones about responsible seal-watching – both including the ‘do not feed’ message. The Cornwall Marine and Coastal Code reinforces this message. Similar information is available in poster form, as a ‘frequently asked questions’ document or a summary the 3 R’s of risk associated with feeding wild seals. 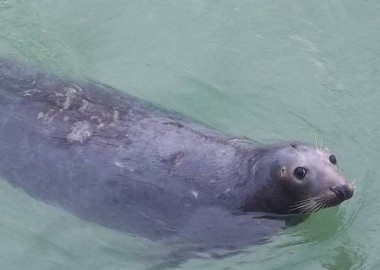 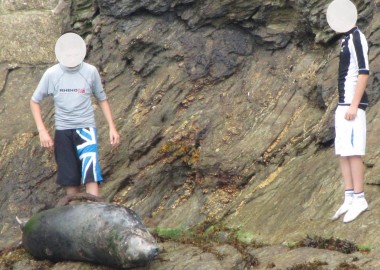 There have been incidents of seals in harbours (including St Ives and Newquay) getting hit by boat propellers, which can cause horrendous traumatic injuries.  Thankfully this is a rare occurrence, but something that does occur more often is getting angler’s fishing hooks and lines caught around them.  We have been incredibly lucky in Newquay harbour especially, where several seals wander in through the summer months, that none have yet had a hook in the eye – although one in particular (Superman) came extremely close – which would have blinded him.  Ingesting hooks has been known to kill seals by perforating their stomach and/or causing infections, which would have been very painful. 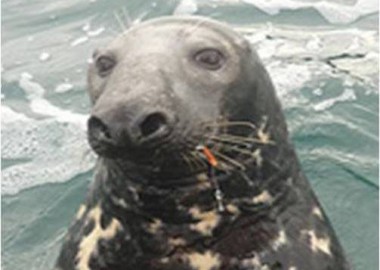 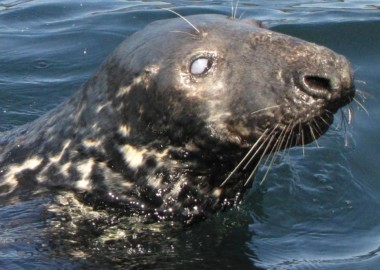 Contamination of harbour water with diesel and oil will also have negative effects on a seal’s health, most obviously on their eyes.  Long term or acute contact with diesel leads to slow organ failure and death. This happened in Newquay Harbour after a fire ruptured a diesel storage tank polluting the harbour.  Two of the seals that visited most regularly over several years were both in the harbour that day and could not be persuaded to leave. Within four months both had gone missing and were never seen again (unlike the seals that were absent that day and who have continued to visit ever since).

Sadly, the problems don’t end there.  In Newquay we have seen parents encouraging their unaided toddlers to go up to seals on the shoreline and handfeed them fish, while local youths have on a number of occasions been spotted trying to intentionally ‘tombstone’ off the pier and land directly on top of the seals or walk up to the seals and touch them. There have also been some horrendous incidents of inebriated people leaving the pubs in St Ives and Newquay late at night throwing glass bottles at the seals, and on one occasion, trying to set one on fire by pouring lighter fluid on its back (luckily a local volunteer just happened to be passing by and stopped this!)

Seals are intelligent creatures and once they learn of an easy food source, it is very difficult to allow them to revert back to their normal wild behaviours. This leads them into a lifetime of stressed out, anxious behaviour loops, constantly rushing between numerous boats begging for yet another fish.

It is easy to overlook the fact an adult male grey seal can weigh over 250kg, can be quite aggressive when provoked, and has a bite four times more powerful than a Rottweiler!  It doesn’t bear thinking about what might happen!  Let alone who would be legally liable should anybody get bitten – it could be the harbour master, harbour owner, the fishermen or fish shop that sells fish to people to feed it, or anybody else that might be encouraging the activity.

Bacteria in seals’ mouths can cause severe infections that require medical attention and specific antibiotics.  Then there is the worry that – much like the herring gulls in our coastal towns – we will change our minds and consider the seals a problem in harbours.

In summary, experience in Cornwall has shown that feeding wild seals rarely helps the seals themselves and can in fact cause them considerable harm, so this is why CSGRT do not advocate feeding wild seals anywhere. The best we can do is to try to educate people into realising what their actions might result in and hope that they will decide that the harm the seal will now be exposed to outweighs any short term pleasure we might get from feeding it. Leaving it to carry on as it was before is safer for the seal and in the best interests of its long term health and welfare.

Grey seals are listed in the International Union for the Conservation of Nature (IUCN) Red List of species,  the Bern Convention (1979) of protected fauna species (Annex III) and the EU Habitats Directive (Annex II and V species). Special Areas of Conservation (for example the Isles of Scilly and Lundy in the southwest) have been set up to protect seals under this legislation which has been incorporated into UK law.  In the UK seals are additionally protected by the Conservation of Seals Act. Seals listed in Special Sites of Scientific Interest (SSSI) citations make it a criminal offence to disturb them above the mean low water mark. The Sea Mammal Research Unit reports on the status of grey seals in the UK. Their 2012 Special Committee On Seals (SCOS) report modelled the average estimate of the total UK grey seal population at 104,200 (around the same number of grey seals as red squirrels in the UK).

They deserve our respect and with 38% to 44% of the world’s population in the UK, we have a moral duty to protect them on behalf of the rest of the world.

If you have been convinced that feeding wild seals is bad for them, then please share a link to this webpage widely on your social media sites.

If you do see or hear of any seals being fed in Cornwall then please do help us to gather evidence on this issue by ringing the Cornwall Marine and Coastal Code hotline number on 0345 201 2626 to register the incident.

Thank you from our precious seals!