Last week Cornwall Seal Group Research Trust’s (CSGRT’s) Sue and Kate went out on one of their twice weekly surveys of the West Cornwall seal complex. Usually at this time of year, seals are hauled on the offshore island, but the rough seas and cooler temperatures have obviously confused the seals, leaving Sue and Kate surprised to find a good number hauled on the mainland site instead. As Kate began counting, aging and sexing the seals, Sue was taking photos to enable the individual identification of each seal. Suddenly they spotted an extra seal lying on its own at the back of the beach. Although nearly invisible, as Sue zoomed the camera in, she was saddened to discover that the young male seal (one of last year’s pups) was actually entangled in a long piece of monofilament net. This was cutting in deeply around its neck and there was no doubt that the seal would not survive without being rescued. 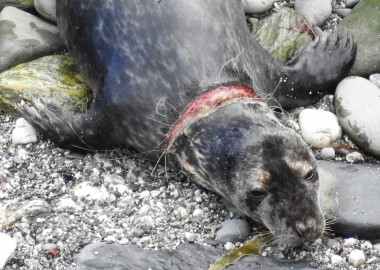 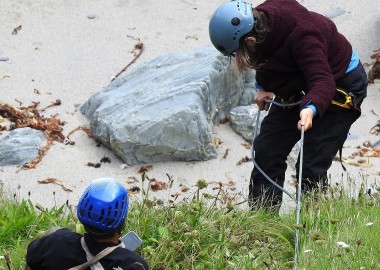 Whilst rescues are not always possible given weather, sea and tide conditions, combined with how close the seal is to the sea and the number of other animals present, Kate and Sue were hopeful that a rescue might just be possible. They rang British Divers Marine Life Rescue’s hotline number (01825 765546) and their Welfare Development and Field Support Officer Dan Jarvis was soon on the scene and agreed that a rescue might be possible. A rope safety team of Chris Howell and Phil Knight were mobilised, while Tamara Cooper, Animal Care Curator at the Cornish Seal Sanctuary, arrived to assist as well. As a crowd gathered to watch, the rescue team made their way down the steep cliff.
Dan said “we have to go down the cliff as stealthily as possible to avoid alerting the seals to our approach, otherwise they will head back into the sea before we get anywhere near them and we may never get another chance to rescue the victim. Luckily our combined experience of this very technical type of operation, also involving a short abseil of a sheer section at the bottom of the cliff, went undetected by the seals, allowing Tamara, Sue and myself to get on to the far side of the beach. We then had to creep around the back of the cove to remain out of their sight until we were close enough to make the final dash to capture our target seal.”
Tamara added “the seal struggled a lot at first, but settled down once we covered its head with a towel to help me straddle and restrain it safely. Meanwhile, Sue and Dan were able to use a recurved knife to cut the net from around its neck and clean out the wound, which was deepest across the back of its neck. Saltwater is great for helping wounds stay clean and heal, and our past experience makes us confident that this animal would be able to recover on its own without the need for further rehabilitation.” 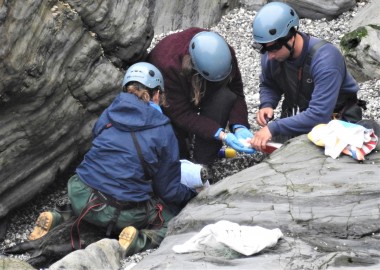 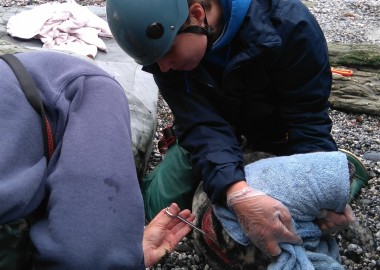 The team confirmed that the young seal was actually a boy before the towel was removed and, sensing freedom, the seal spotted the sea and accelerated off at top speed for the surf. Without a second glance, ‘Lucky flipper’ was off to join the numerous heads bobbing about just offshore. 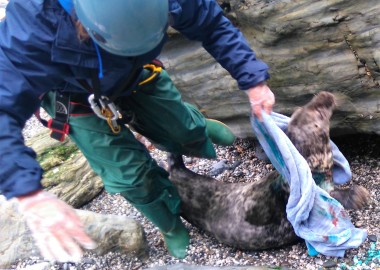 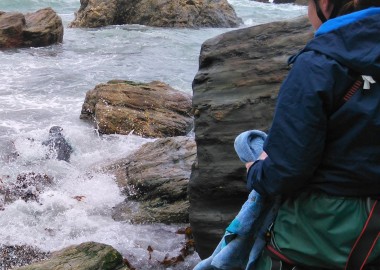 Keen to do all they could to help seals, the rescue team did a quick ‘two minute’ beach clean and were able to remove 23 single use plastic bottles, five other small pieces of dangerous monofilament net, four fishing buoys and numerous bits of plastic. All the litter was packed into rucksacks for the ascent back up the rope to the clifftop, where onlookers gave the rescue team a huge round of applause. 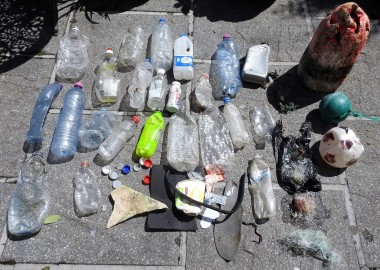 Back in the office, Sue and Kate were able to confirm that ‘Lucky flipper’ was the same seal that BDMLR had tried to rescue two days earlier but had not been able to do so as a helicopter had flown low directly over the cove just prior to the rescuers leaving the clifftop, which had spooked some of the seals, including Lucky flipper, into the sea.
“Lucky flipper is just one of over 300 entangled seals that CSGRT have recorded around the Cornish coast in the last 18 years. Many of these have been rescued by BDMLR, but we know from Cornwall Wildlife Trust’s Marine Strandings Network that others have died very quickly as a result of their injuries” said Sue.
She continued “we can all help prevent this problem for seals by recycling fishing gear prior to the end of its life, never discarding gear at sea and by doing beach cleans to remove those bits of gear that get lost during storms. Cornwall seals are so lucky to have fabulous joined up network of people willing to help out at a moment’s notice when a seal is in trouble, along with partner organisations who help us all make the Cornish seas cleaner and safer not only for seals, but other marine life too. By working together we all keep our shores a place we want to revisit, as it makes us feel happier and healthier when we out and about around the coast.”

To support or donate towards our important work helping seals around the SW, please email [email protected] for more details.

Huge thanks to British Divers Marine Life Rescue, the Cornish Seal Sanctuary and Chris Howell and Phil Knight for their rope safety expertise.

Today, Sue and Dan from CSGRT and BDMLR did an interview with BBC Spotlight about this rescue for screening tomorrow.