September has seen the sudden appearance of several beautiful white coated grey seals pups along our Cornish coastline. Along with the delight comes the inevitable concern, when one of these skinny little furry bundles appears without its mother.

This happened recently on a well known pupping site, so a member of the public did the right thing and called the British Divers Marine Life Rescue (BDMLR) hotline 01825 765546 for advice.

Cornwall Seal Group Research Trusts (CSGRT) founder Sue Sayer, herself a BDMLR trained Marine Mammal Medic, was despatched to assess the situation. Sue said “as soon as I arrived I knew something could be wrong as the pup was very active (hauling all over the beach) and vocal (repeatedly calling for its mum to come and feed it!). These are two red flags.” 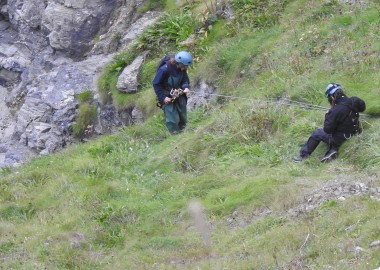 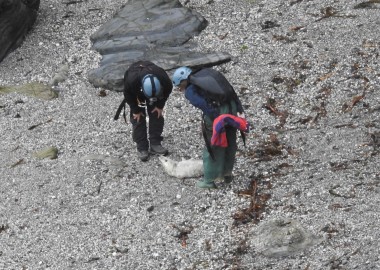 BDMLR have strict protocols about how to assess a situation such as this, so began a lengthy monitoring process, looking out for the pup’s mum in the sea. Sue says “I could see a potential mum in the sea but in four hours of continuous observation, she did not come near the pup”. She was then joined by BDMLR charity director and local area coordinator Dave Jarvis and his wife Lesley and as they arrived the potential mother hauled out, sniffed the pup but then left having not fed it. Weather forecasts meant that there would not be another rescue opportunity for at least 36 hours. As the unfed pup would not have survived that long, Tamara Cooper – Animal Care Team Leader from the Cornish Seal Sanctuary (CSS) was called and together the difficult decision was taken to rescue the pup. 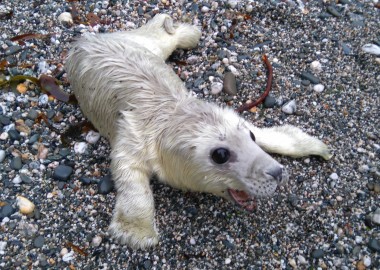 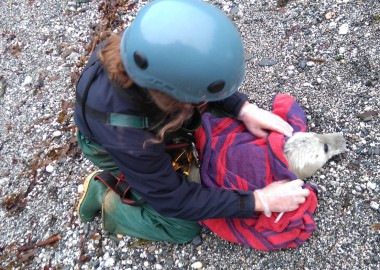 A tough site to rescue a seal pup from, the team required a rope expert to be present and Phil Knight (a CSGRT charity trustee) volunteered to take responsibility for the safety of the rescuers Sue and Tamara. A scramble followed by a steep abseil soon saw Sue and Tamara walking across the beach towards the pup. On closer inspection it was just a tiny and baggy, furry bundle of bones.  Hugely experienced, Tamara said “we knew straight away that the pup needed rescuing and this might be our only chance to save its life. I was easily able to immobilise the pup with a towel and assess its condition. Fortunately its temperature was normal and it had no obvious injuries, so Sue and I bundled it into the seal rescue bag and carried it back across the beach.” 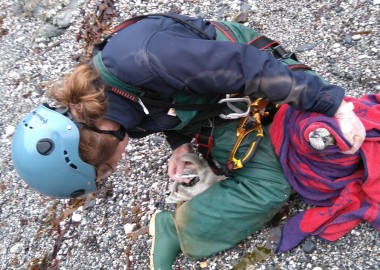 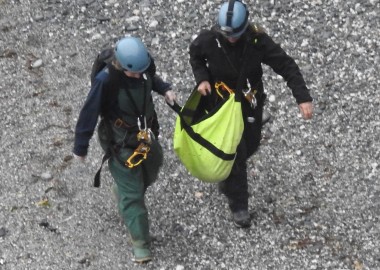 Next came the hard part – getting the seal safely back to the clifftop with minimal distress. Sue wore the seal rescue bag like a rucksack, but despite having climbed for decades, this was the first time she had been required to ascend with a 12kg moving, howling seal pup strapped to her back. “I have to say I really struggled to even get off the ground as I was aware of not wanting to overbalance and bash the seal pup on the rocks. My technique wasn’t great and my arms were pumped by the time I reached the top of the rope. What a relief!”

From this point Sue and Tamara were able to share the load again and carry the pup up the path to the waiting BDMLR and CSS support team on the clifftop who by now had been joined by a large number of onlookers, all delighted to see the pup lifted to safety. Tamara’s colleague Natalie assisted with hydrating the day old pup before its transfer back to the CSS at Gweek where the pup is now undergoing its rehabilitation back to full health ready for release.

All the members of the public who were concerned about the pup and particularly those who rang 01825 765546 (please put the number in your phone) to report the pup to BDMLR.

Dave and Lesley Jarvis from BDMLR and the rest of their organisation.

Tamara Cooper and Natalie Dyer from CSS and the rest of the team now rehabilitating this pup.