“Horrifying and life changing” – that’s one person’s description of the day their St Ives boat trip went badly wrong. As an enjoyable angling trip came to a close and the boat returned to St Ives harbour, customers gave in to the begging eyes of two seals – ‘Box desk’ and ‘Clouds’ following their boat. Sadly, in a split second of unfortunate circumstances, adult female Box desk came up to grab a fish that had landed at the back of the boat at the same time as the skipper reversed to park quayside. The sudden grating propeller sound meant Box desk had been seriously injured. 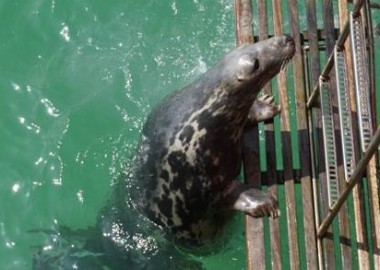 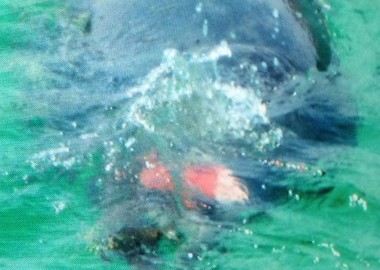 It took onlookers a few moments to realise what had happened as the seal splashed vigorously at the surface and dashed away revealing a large pink injury by her tail.  Unintentional on everyone’s parts and gut wrenching for those involved, the implications for the seal are still unclear. Despite reports to the contrary, no confirmed sightings of Box desk have been reported since. So, if you see in a seal in St Ives harbour please email a photo to [email protected] . 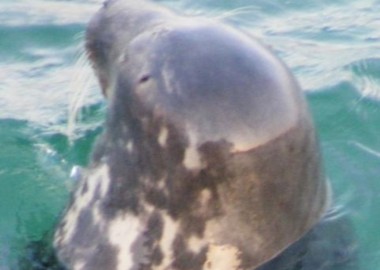 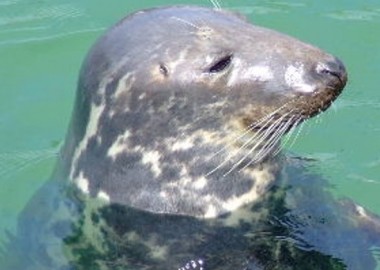 This stunningly beautiful female seal has been known to the Cornwall Seal Group Research Trust (CSGRT) since 2009 as Box desk from the unique fur patterns on the right side of her neck. She is thought to be over 15 years old. We all need to make sure that Box desk hasn’t suffered (or worse) in vain.  We need to learn from her misfortune and get this sorted! We must STOP FEEDING SEALS! Tough love means NEVER feeding wild seals.

Harbours are busy human spaces with lots of hidden dangers – diesel (when inhaled can kill seals from slow organ failure); propellers and other human debris all present risks to seals. Seal behaviour changes as they become increasingly stressed from their constant focus on finding food, chasing between boats to see which will feed next and snapping at each other when their usual pecking order is upset. Sue Sayer from CSGRT says “a seal’s eagerness to be the first to snatch the dangling fish from our hands, increases the risk of them misjudging distances at speed, which could result in accidental injuries for us. Seal bites are extremely serious and always require medical attention with specific antibiotics. Boat operators face litigation which could cost them their business and livelihood”.

Sue Sayer continues “this was an accident waiting to happen. Almost all the seals identified as visitors to Cornish harbours have been injured – adult female Clouds has multiple back slashes from a propeller and the ironically named ‘White propeller’ had a deep gash on the top of his head that resulted in him going blind. ‘Medallion man’ and ‘Radley’ in Newquay harbour have been photographed with fish hooks caught in their mouths and with line around their flippers and two seals ‘Splash’ and ‘Smiles’ were thought to have died of diesel poisoning after a spill during a fire”

Dan Jarvis from British Divers Marine Life Rescue (BDMLR) “the worst part of all this, is that Box desk was heavily pregnant. The summer months for grey seals are a time when they should be putting on weight to get them through their pupping season in autumn – she’ll lose a third of her own body weight at this time. Even if Box desk’s pup survives to be born, if she doesn’t have the energy to feed her pup properly, then both she and her pup risk dying from starvation by the spring.”

So even if the consequences of feeding seals are not as obvious as an immediate injury, the knock on effects can be felt over the next few months, potentially resulting in another dead pup on a Cornish beach!

So let’s make a stand together!

We can all pledge to practise tough love and STOP FEEDING SEALS now and forever, discouraging others from doing so too!

Let Box desk be the last seal (in a long line of seals) to get injured – practise tough love and ‘STOP FEEDING SEALS’! 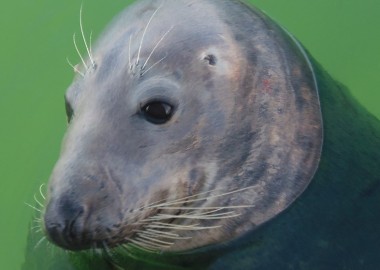 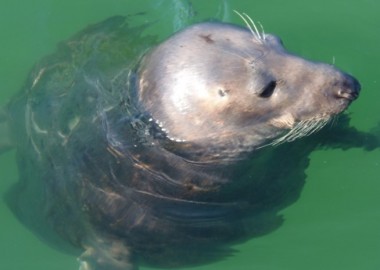 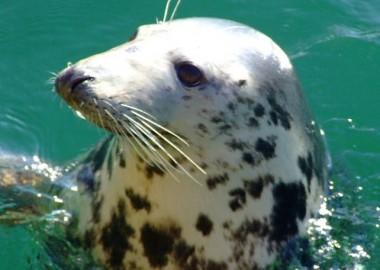 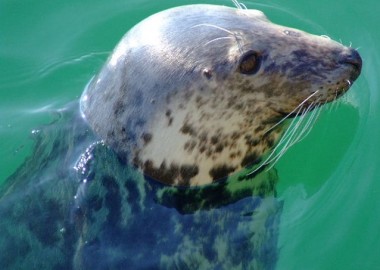 Box desk’s two other companions have routinely been sighted since the accident – ‘Clouds’ and ‘Wings’ – both pregnant adult females. Clouds is unusual for a female being so dark and plain. Her only obvious markings are her back scars presumed to have been propeller injuries from before we first identified her in 2009. Wings is a classically marked female who is also unusual in that we know she has had pups in both Cornwall and SW Wales (she is supposed to have her pups where she was born!) We have been tracking her since 2003 so she is likely to be around 20 years old.

Box desk on a wild seal haul out looking fine, fat, fit and healthy before her accident.

We need to find out where Box desk is now to know if she is recovering and still alive. If you see a seal in the vicinity of St Ives, please take photos and email them with the location and date to [email protected] – we hope that Box desk is just keeping a low profile to help with her healing and recovery.

Thank you to our amazing CSGRT volunteers for their photos of Box desk, Clouds and Wings, especially Colin at www.cornishlight.co.uk