The words of Cornwall Mammal Group…

The AGM at Ladock gave us a great opportunity to acknowledge one of Cornwall’s leading wildlife enthusiasts and to recognise the work she has done to help protect some of the most important international sites for the grey seal (Halichoerus grypus).

CMG has always tried to encourage an interest in the County’s mammals and to promote studies and surveys. Furthermore we have always strongly promoted the idea of communicating with the wider public and to organisations and other workers in the field. There are some people who go above and beyond in achieving these aims and the Cornwall Mammal Group has made several small awards to recognise these individuals in the past.

Sue Sayer is extremely well known among the Cornish wildlife world, but also critically amongst the national and international marine conservation world, for her work on seals around the Cornish coast. Sue’s lifelong passion for all things pinnipedal, along with the support of her fanatical Seal Groupies, have made Cornwall’s grey seals some of the best studied populations in the world. Driven by a rigorous approach and attention to detail, supported by a frankly odd ability to recognise hundreds of individual seals from their coat patterns, Sue and her co-workers have been able to monitor seal movements in great detail and to demonstrate connections around the Western Atlantic that have proved extremely important for the conservation of this endangered species. Sue always seems to be out surveying, organising, analysing data, giving talks and bending the ears of those able to influence MCZs and SSSIs. She has also written an excellent and accessible book on Cornish seals which gets her message out to the general public as well.

The committee considered several extremely worthy candidates for the award this year and after exercise of the democratic process Sue is a deserving winner.

The committee wishes to recognise Sue’s work on the identification and movements of Cornwall’s Grey seals and furthermore for her tireless promotion of seals among many interest groups, quite literally putting our grey seals on the map. 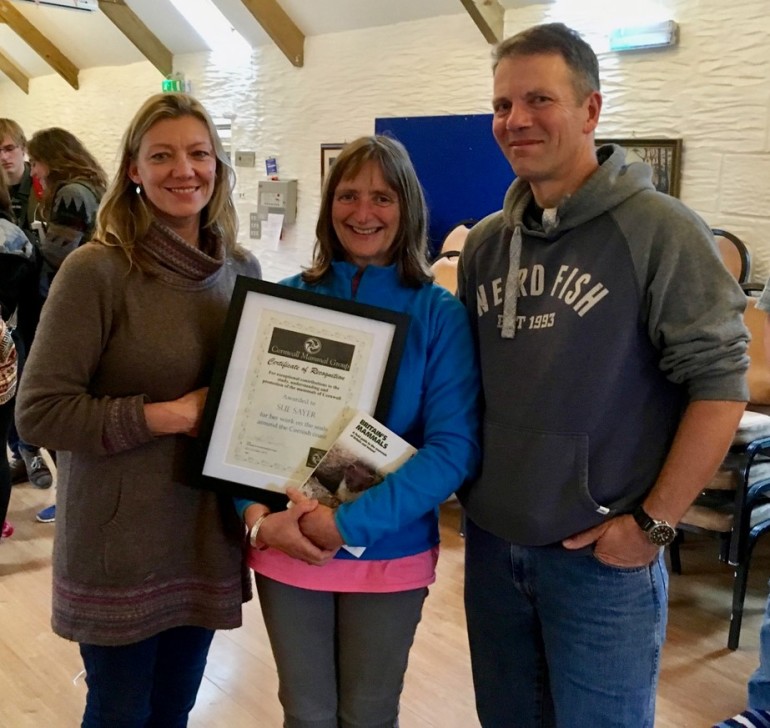 We presented Sue with a framed certificate and a copy of the new Wild Guide to Britain’s Mammals so that she identify any non-seal wildlife that she comes across while she waiting on the clifftops. Sue gave us a short presentation on her recent work and the Seal Group’s history. Keep up the good work Sue!

A word from Sue …

I am extremely privileged to have found my passion in life and I am fortunate to have the freedom to be able to indulge this! I accepted the award on behalf of everyone who has ever connected with CSGRT, but particularly those who routinely give of their time to ‘passionately protect Cornwall’s precious marine life’. I have come to realise that what I do has as much to do with people as it does with seals. I value every one of our amazing volunteers without whose collective achievements I would not be receiving this award. Thanks too to our trustees who give tirelessly of their time, energy and support and to my partner Chris without whose income I could not have volunteered full time!

It is wonderful to get this award, knowing that people you hugely admire and respect value what you do. There is no time to rest looking forward, as our best and most sensitive wildlife sites are under pressure and proactive management is essential for Cornwall to protect our shared terrestrial and marine environment that underpins our financial economy. Doing what we have always done is no longer good enough! Despite this, I remain massively optimistic about the future as I believe in the power of our collective action alongside our wildlife’s ability to thrive despite all we throw at it!