Sue Sayer from Cornwall Seal Group Research Trust (CSGRT) first heard about environmental DNA (eDNA) back in 2012 at a European Cetacean Society Conference in Galway. It was a very exciting and truly ground breaking, non invasive survey method that would be a game changer in marine research.

So, when CSGRT were approached by Alex Hayward and Alex Scott from the University of Exeter, Penryn campus to see if they could come on our Marine life and human impact boat surveys to take sea samples, we jumped at the chance to help out with such exciting research!

Sharks and rays face a multitude of threats to their survival, from bycatch to habitat destruction, and the incredibly wasteful act of finning for use in soup. Despite increasing awareness of their ecological importance, understanding of sharks remains relatively limited, especially in areas like the UK where they are harder to spot, monitor and study than in tropical locations.

Until recently, shark surveys relied on data collected from fisheries and damaging practices like trawl surveys. At the University of Exeter, Penryn campus we are starting to apply novel techniques such as eDNA as alternatives. eDNA is a non-invasive, relatively cheap method, where samples are collected from the environment (this can be soil or water taken from lakes, rivers or oceans). DNA is then extracted from these samples and identified to species level. Essentially, this allows an evaluation to be made about the presence of a species from a simple bottle of sea water. This can provide information on relative abundance and when and where the species has been. Of course, this is great for hard to find animals such as sharks and endangered species as it is a non invasive survey method.

Alex is using eDNA to survey sharks and rays around the Cornish coast and this will act as a pilot study for the method in Cornwall. He hopes to develop a shark and ray eDNA toolkit  to evaluate the diversity of the resident and migrant sharks and rays here in Cornwall and examine the effectiveness of the eDNA approach as an alternative for monitoring our crucial marine ecosystems.

With the generous help of various local people and organisations like the Cornwall Seal Group Research Trust (thanks Sue Sayer!) and Atlantic Diver (thanks Chris Lowe!) we have been able to join their ‘marine life and human impact’ boat surveys, allowing us to sample a transect that stretches 100km across the North Cornwall coast. We also plan to head offshore to take deep water samples, hopefully enabling to us detect some of the rarer species. Many sharks live at depths of up to 2000m so the deeper the better!

eDNA samples have already been collected from two boat surveys and besides seasickness from certain members of our team, these have been very successful. We’ve also met some great people and witnessed some of Cornwall’s fantastic marine life along the way! Now we look forward to additional summer excursions and keep our fingers crossed for the results. 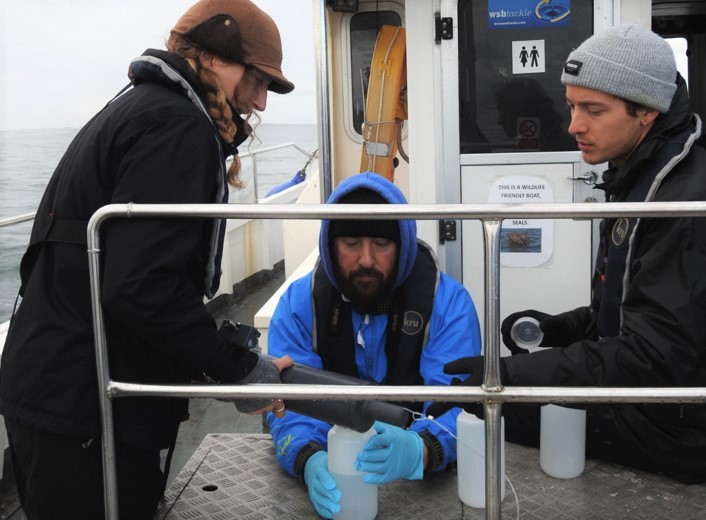 Robyn, Alex and Alex transferring sub surface sea water into duplicate sampling bottles for eDNA analysis back in the lab.

CSGRT are extremely proud to be able to participate in this research by enabling water samples to be collected along our boat survey transects that can be used for eDNA analysis looking for shark and ray species. This is the first project of its kind in the UK.