Oh no! ‘Medallion Man’ and ‘Radley’ have both been HOOKED by angling lures. Sadly this is an unintended consequence of feeding seals in harbours.

On a recent boat survey, CSGRT witnessed Medallion Man – an iconic adult male grey seal begging unmercifully around a Newquay Harbour tripper boat, from which he got fed to the delight of the customers aboard. A few days later he was hooked through his mouth. Yesterday Mike posted a photo of pregnant adult female Radley on the Cornish Seal Sanctuary facebook page, showing that she too has a barbed hook – her’s caught in her head. 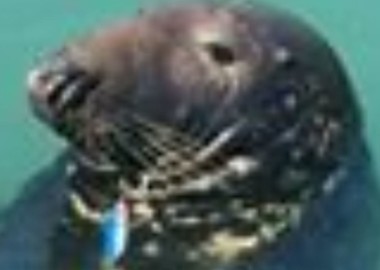 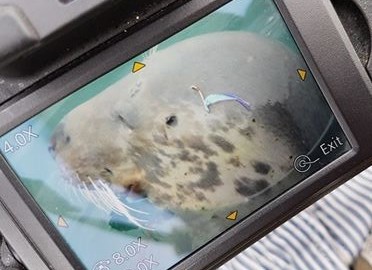 Please take the time to chose one of Newquay’s  seal friendly boats that does NOT allow or condone seal feeding. Peoples’ apparent generosity is misplaced, keeping seals in a hazardous harbour environment where their quest for an easy meal has ended in a hooked lip and head. This time last year, pregnant adult female grey seal ‘Box’ was slashed by the propellor of a boat from which she was being fed in St Ives harbour. Please watch our film ‘Food for Thought’.

Please practice TOUGH LOVE and NEVER feed a wild seal. ANGLERS – if you see a grey seal, REEL YOUR LINE IN and take the time to enjoy the sight of this globally rare marine mammal. With no fishing action, the seal will soon lose interest in you and move away, allowing you to RESUME FISHING WITH NO RISK TO THE SEAL.

Medallion Man and Radley are being monitored by local volunteers from both Cornwall Seal Group Research Trust and British Divers Marine Life Rescue (BDMLR). If you see a hooked or entangled seal, please ring BDMLR on 01825 765546. If you see a seal, please report your sighting with a date and location (photos are a bonus) to [email protected]

First identified in 2008 by CSGRT founder Sue Sayer at West Cornwall, Medallion Man (NM7) spends the season at high tide begging from boats in Newquay Harbour resulting in an obsession for food and a stressy life anticipating which boat will feed him next. Last winter he was identified as the dominant male at a pupping site west of Newquay as he mated with a well known adult female S27 ‘Back c’. Radley appeared a year later (2009) as a youngster and she delighted us in 2016 when we discovered where she has her pups – further west in wilder, remoter and safer habitat.

Let’s hope their fishing lures pull out (although this will undoubedly be very painful for them especially if the barbs rip out – ouch) by the time Medallion Man’s first known pup is born and before Radley is due to give birth this coming autumn.

Massive thanks to Anne (Medallion Man) and James (Radley) for their photos.