Gannets are stunningly beautiful seabirds. Big and powerful, they dive up to speeds of 60 mph hitting the sea surface with enormous force. Their skulls are specifically designed to minimise and withstand the incredible forces generated as they hit the water.

‘Ghosts’ are the remnants of lost fishing gear that are found all around our coastline posing a considerable risk to all our marine life.

Cornwall Seal Group Research Trust’s (CSGRT’s) investigation into seal entanglement shows that  we have the second highest rate of entanglement for any phocid seal species in the world.

CSGRT’s research into ghost gear around Cornwall has recorded all types of lost line, net, pot and hooks and these have regularly been observed in shag’s nests, as well as bonded to kittiwake nesting ledges and on one occasion in a cormorant nest.  This is always a massively sad sight and sometimes the birds have been injured by or swallowed the gear and in some cases the resulting serious injury, infection or starvation has ultimately been fatal.

To date we have not seen many gannets in ghost gear, although this is well documented elsewhere in gannet breeding colonies.

So this summer has been exceptional and we are sad to report two dead gannets in ghost gear in two months!

On 09/06/19, Jon Matthews owner of Woodstock Guest House in Penzance intercepted Hannah from Marine Discovery as she rowed across the harbour. Jon had recovered a dead gannet from the sea from Cornwall’s south coast. Hannah brought the gannet ashore and took the photos below. It was so devastatingly sad to see such a supreme and stunningly beautiful seabird so hideously entangled in lost chafe gear* 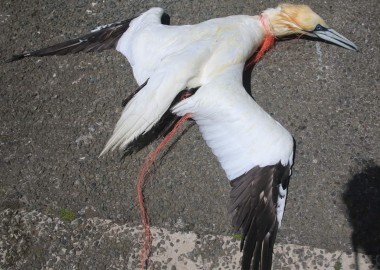 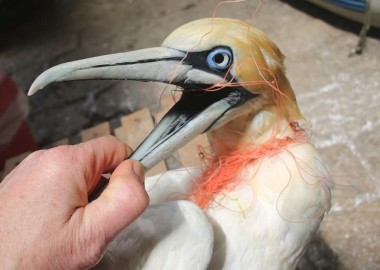 On CSGRT’s first of three summer boat surveys covering a 115 km stretch of Cornwall’s north coast (01/07/19), we found a second. It was shocking enough to see a dead gannet floating at the surface, but we could not believe our eyes when we saw it too was entangled in orange chafe gear. So now a north coast dead gannet in chafe gear. What were the chances of that?

We retrieved the gannet from the sea and examined it on board. The beautiful detail outlining the gannet’s beak was matched by the horror of seeing multiple chafe gear strands trapped through the gannet’s mouth. We then had a massive shock as we noticed that it appeared the gannet had been shot in the top of its head! After several seconds of disbelief we realised that a scientific investigation beyond our capabilities was needed, so we respectfully packed the gannet up and contacted Vet Pathologist James Barnett to find out if he would be able and willing to post mortem the gannet for us. A post mortem would help to ascertain whether the shooting was an attempted mercy mission – putting a debilitated and struggling wild bird out of its misery. On the other hand, had the bird been healthy with evidence of recent feeding, the shooting could have been avoided by the finder calling British Divers Marine Life Rescue on 01825 765546. 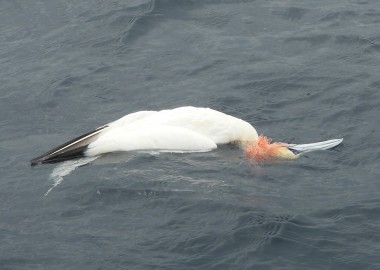 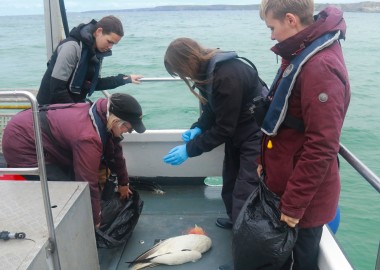 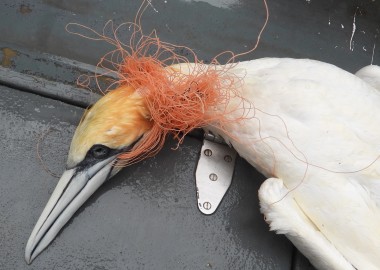 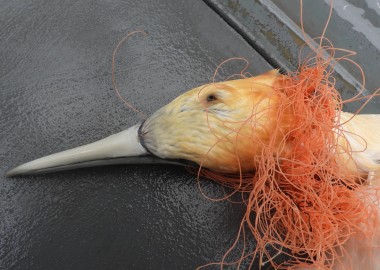 Such a sad sight. A beautiful sea bird with a gross entanglement and a bullet wound

At the post mortem, the gannet measurements were taken. Incredibly it’s wing span was almost as long as the post mortem table itself – 184 cm! The bird weighed 2 kg and was an adult male in sub optimal body condition.

James was able to remove the bullet and confirmed it was from an air rifle. The haemorrhage around the pellet showed that the gannet had been alive when shot. But the pellet had barely penetrated the gannet’s skull which is several mm thick to withstand the forces experienced when diving. We are keen for everyone to know that shooting a big seabird with an air rifle is not an effective or humane method of euthanasia. 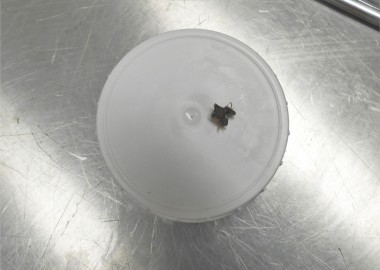 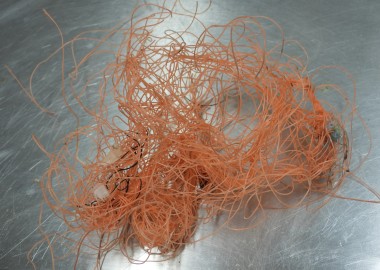 The gear removed from the gannet was substantial although light weighing in at 10.3 g. It was made up of different materials, as the chafe gear had presumably become mixed up with other floating plastic gear. Prior to removal, James examined the chafe gear in the gannet’s beak and it was obvious that a single strand had been swallowed by the bird. James tracked this strand right down the bird’s gullet and throat and was surprised to find it had gone all the way down into the gannet’s stomach where it was coiled slightly. Sadly this line was only accompanied by dried digested blood. So there was no evidence of recent feeding and we concluded that the bird was in a starving state and had clearly been severely debilitated by the ghost gear choking its beak and preventing feeding. 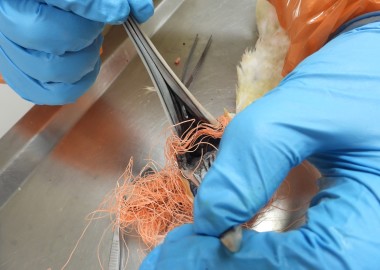 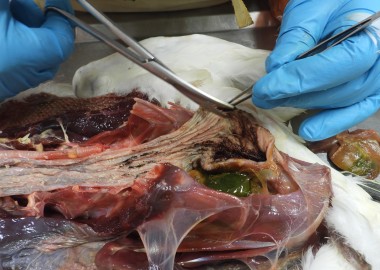 We assume the finder had intended to be merciful and put an end to this struggling bird’s life, which is reassuring. However, it was misguided to assume that an air riffle would have sufficient power to do this humanely. We will never know whether the bird was shot in the air (perhaps whilst diving as the wound was on top of the head?) or next to / on board a vessel or the true motives of the person conducting the shooting.

Please do always report a dead stranded marine creature of any kind to the Cornwall Wildlife Trust’s Marine Strandings Network  (CWTMSN) on 0345 201 2626 so that a trained volunteer can go out and investigate your find. This is key, as sometimes the discoveries can be surprising or shocking but either way the record makes a valuable contribution to science! So our record has been shared with both CWTMSN and a researcher in Scotland who is specialising in the interactions between sea birds and ghost gear.

Many thanks to Hannah and Duncan at Marine Discovery for sharing their story with us and John Pethick for collecting their south coast gannet for transport to us.

We appreciate the support and time generously donated to us by our amazing boat survey volunteer spotters and experts. Newquay Sea Safaris and Fishing make their boat available to us at hugely subsidised rates. Without them, CSGRT could not operate and sustain systematic boat survey transects all year round over the long term. We are massively grateful to you all!

*In our experience, chafe gear can be orange, blue or black and it is tied in looped fringes (called dollies) to the base of a trawl net. It acts like a mattress beneath the trawl net preventing the trawl net being snagged on a rough sea bed and damaged. This plastic net is actually designed to break off.