My alarm shocked me awake at 5:15am on 28/12/19! Looe Island seal and bird surveys always require an early start and this was no exception! An hour later I was packed up in the van and on my way with heaps of survey kit – telescopes, binoculars, cameras and enough food to sustain me all day!

Boy was it dark, but at least the skies were clear and although cold, it was mercifully dry! The long drive was uneventful and the sun was just beginning to peep above the horizon as I parked along Hannafore, overlooking my destination of Looe Island. It was a spectacular sight and made getting up early well worth it! 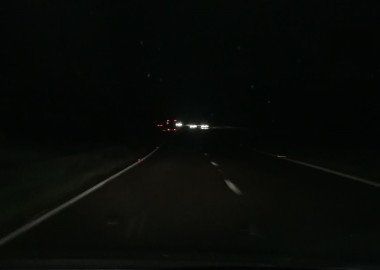 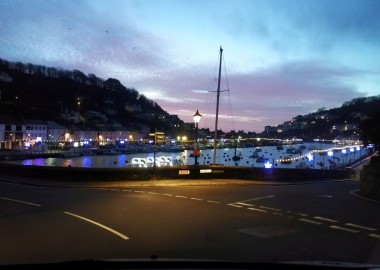 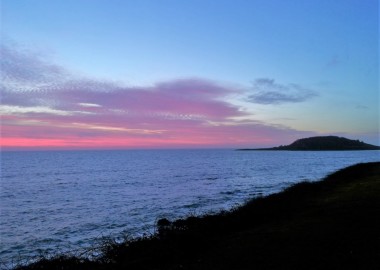 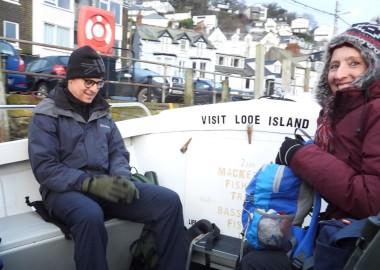 Even though this is our 100th survey in 11 years, it is still exciting as everyone gathers by the West Looe ferry steps, anticipating Dave Butter’s arrival to take us from the harbour to the island. As soon as survey coordinator, Martin, had checked we were all present and correct, eight of us got aboard. The trip was a little lumpy with a few waves spraying us and it was too rough to land at the island jetty as planned. So, Jon and Claire (the island wardens) greeted us with the trolley and we timed our runs between the waves to make footfall on the beach.

We had a quick welcome, warm cuppa at the picnic table before we headed off to do the bird survey walk around the island and we had a real treat in store. There were plenty of migrants from bigger (Great Northern Divers to Eider Ducks and Cormorants, 3 species of birds of prey – Buzzard, Kestrel and Peregrine Falcons) to smaller (Fire and Goldcrests) as well as flocks (Linnets, Long Tailed Tits and Turnstones) and the regular four Gull species. Highlights included a Slavonian Grebe, a ringed Shag from France, Herring and Greater Black Backed Gulls previously ringed on the island as chicks and a Cormorant struggling to swallow a very big fish! 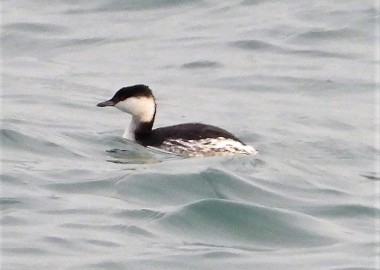 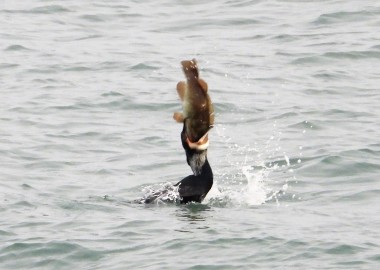 Warmed up by our walk, the amazing sights and wrapped up to keep the heat in, we ate our well-earned, outdoor picnic lunch whilst chatting and catching up on festive news and enjoyed copious amounts of home baked cake and chocolate.

The 2.5 hour seal survey was remarkably uneventful. Only on six of our surveys have seals being absent, but four of these were in January and the very first pilot survey in December, so it was not totally unexpected that our seal count was a big fat zero. Seal numbers rise during spring, peak in summer, before tailing off through the autumn. So, our first ever seal survey had no seals and so did our 100th! We were not bothered, as this makes us appreciate the seals even more when they are around, they just can’t be taken for granted. This is why we need to look after them and it is a good job for visitors that most seals are about during the tourist season as everyone wants to see a seal, boosting the local economy. 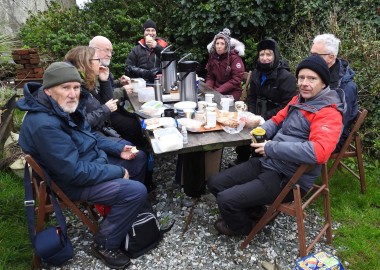 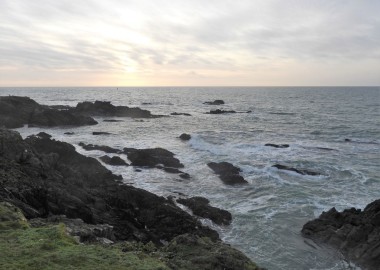 After an indoor data collating session by the lovely wood burner, more tea and cake was scoffed before it was finally time to return to the beach for a bit of sea glass collection while awaiting our passage back to West Looe. A great day was had by all – great company, great cake and great wildlife! We are lucky! Thanks to all our volunteers past and present for making this such an awesome experience and groundbreakingly important science. 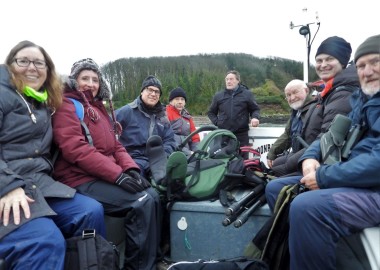 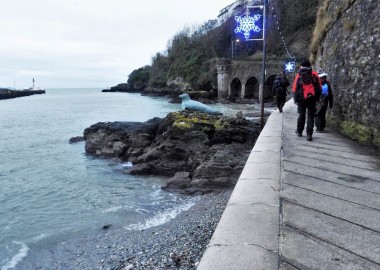 Huge thanks to all our partner organisations in the Looe Island Seal Photo ID Project (LISPIP), particularly Abby Crosby, Claire Lewis and Jon Ross from Cornwall Wildlife Trust and everyone at the wonderful Looe Marine Conservation Group, especially Martin and Jasmin Gregory, Derek and Christine Spooner, Jasmina Goodair and Cliff Davies who routinely organise our surveys and process our data. The Looe Photo ID Hub is coordinated by our Photo ID Ranger, who is funded by the National Lottery Heritage Fund to whom we are extremely grateful for their ‘organisational changing’ funding!

What an awesome natural history team! Thank you all! Here’s to the next 100.