At Cornwall Seal Group Research Trust (CSGRT), we described 2018 as a landmark year, 2019 saw us riding a wave of success, which we managed to sustain in 2020 despite COVID19. Below are excerpts from CSGRT’s 2020 Annual Report. Click here to read or download the full report.

We began 2020 with 4 paid rangers. At the start of 2020, our Rangers and activities were funded by The People’s Postcode Lottery (Postcode Local Trust), Heritage Lottery Fund, Heritage Emergency Fund, Natural England, TEVI, LUSH Cosmetics, TESCO Bags of Help, Seal Protection Action Group, Polzeath Marine Conservation Group, Three Bays Wildlife, Animal Friends, Aspects Holidays, Fourth Element, Mungo Lils on the Hill, Rowes Cornish Bakers, The Bowgie Inn, SeaChangers, Waterhaul, The University of Exeter and our incredible volunteer fundraising efforts and donations. However, during 2020, funding ran out and COVID19 made our finances rather precarious. As a result, we ran our first ever Crowdfunder Appeal. Thanks to everyone’s huge generosity and a lot of hard work by our team, we surpassed our target and raised a total of £21963. 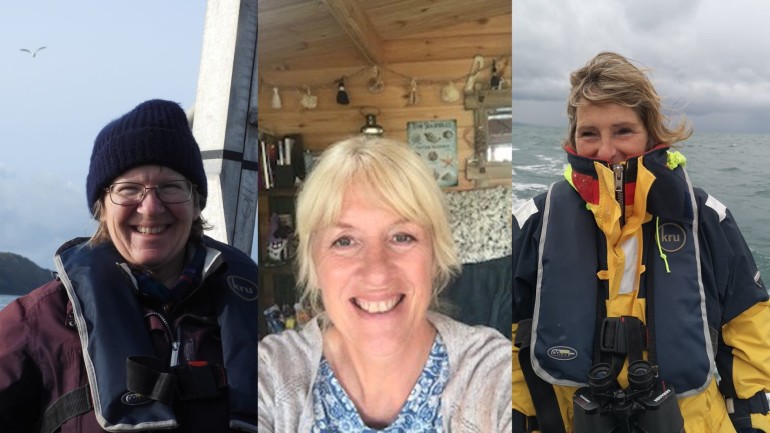 We finally got fibre broadband at CSGRT HQ to help us access our IT network remotely and share seal stories online a bit faster. This helped us to deliver 53 free talks, 14 free events and 53 free online training workshops for our volunteers directly engaging with 8652+ beneficiaries from all age groups. 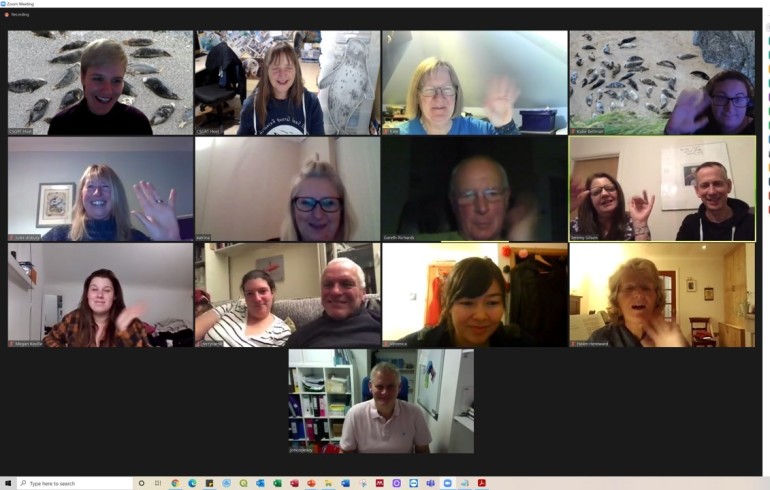 Our news goes around the world via our 4 global partners, website and social media – our Facebook page has 6141 followers (up 30%); our Instagram page has 2671 followers (up 84%); our Twitter account has 893 followers and we set up a new CSGRT YouTube channel in May 2020. Our online talks, training and videos had 4440 views in 2020. Incredibly our Lucky bunting rescue video on our old YouTube channel had 836,970 views – mostly in India!

As ever, people are our most precious asset. By the end of 2020, CSGRT had 25 local area Photo ID (PID) Hubs across the southwest. These incredibly dedicated volunteers are not only eyes and ears for the seals on their local patch, but they conduct surveys, process photos, make and confirm IDs as well as digitise data. Most importantly these inspiring people are ambassadors and champions for seals, representing them in local communities.

Thanks to an incredible 365 volunteers, we were able to process a total of 4438 discrete surveys in 2020 (that’s over 12 each and every day with the Lizard team managing daily surveys for yet another year!) Our surveys covered a total of 280 different seal locations. 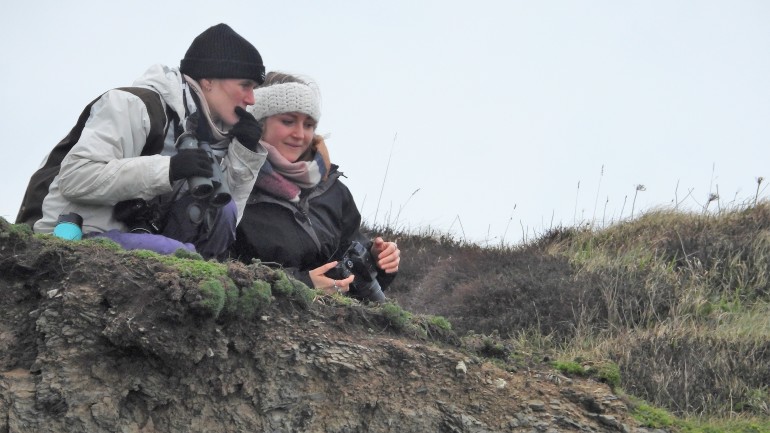 On average 9 seals were recorded per survey. Overall, of the seals that we could accurately age and sex, 73% were adults and 27% juveniles. Of the adults we could confidently sex, 57% were male and 43% female. Our observations included 118 common seal sightings.

Our PID Hubs processed a truly gobsmacking 139,704 photos in 2020 and generated a total of 12162 seal identifications of which 86% were re-identifications. This included our new maximum of 122 different individual seal identifications in a single survey that were confirmed by two experienced volunteers. Of all the seals re-identified, 7 were seals we first added to our catalogues back in 2000 (4 males and 3 females). 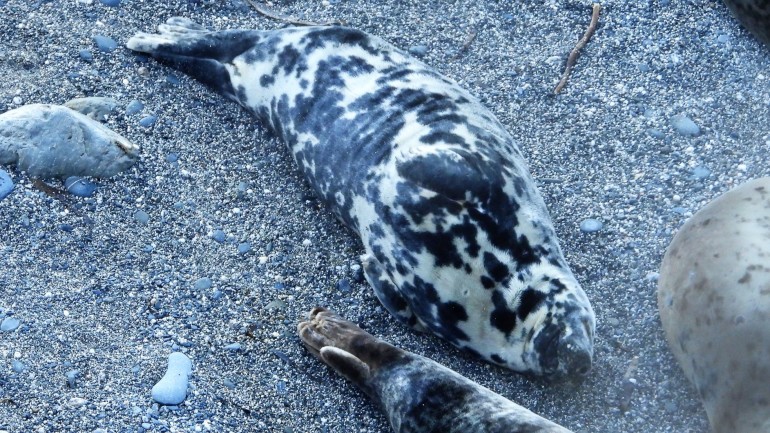 S4 Shadow puppet first identified in 2000, still around in November 2020

Serious level 3 disturbance incidents dropped from 141 to 64 and seals affected from 614 to 192 during lockdown between Feb and July inclusive. Things then deteriorated with August being our worst August for the number of seals affected. In 2020 in total, we recorded 221 different disturbance incidents (of which 156 were serious level 3) with 1319 individual seal reactions (of which 946 were serious level 3), all of which were likely to impact seal metabolisms and physiology. 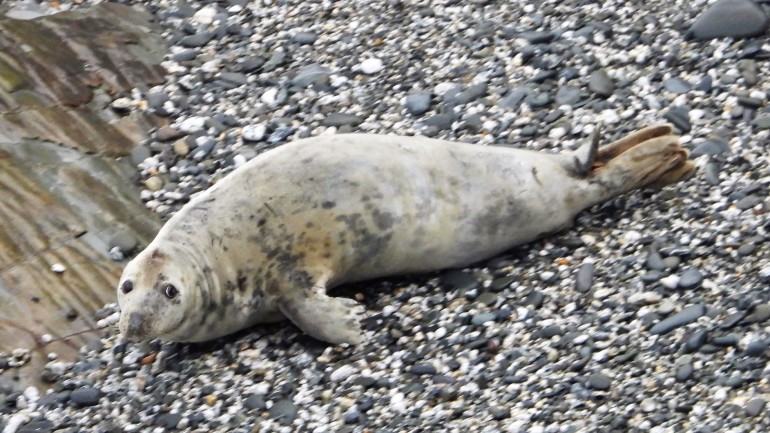 Worried seal looking towards clifftop whilst racing into the sea

On a more positive note, there were 790 sightings of ex rehabilitated tagged seals up to a maximum of 12 on one survey. On all but one occasion, these seals were identified and in total 121 different individual tagged seals were identified post release back to the wild. These had been released from the Gower in southwest Wales to the north, Combe Martin to the northeast, the Isles of Scilly to the west, Gunwalloe to the south and Sidmouth to the east.

DEFRA Policy Advisory for Seals and Seabirds at CSGRT HQ

Sue Sayer chaired the newly formed Seal Alliance’s Disturbance Working Group which held 8 meetings from April 2020 and will launch some exciting developments in 2021. CSGRT were invited to represent seals on the National Steering Group for a new statutory organisation aimed at reducing wildlife bycatch – Clean Catch UK led by DEFRA.

We used the evidence we collated to give seals a voice in 36 public consultation submissions.

At the start of lockdown, CSGRT approached Natural England to review the Aire Point to Carrick Du Site of Special Scientific Interest and seals have been confirmed as a monitored species across this protected area. This is now the third SSSI in Cornwall where seals are features of interest and well protected legally even from disturbance.

In 2020, CSGRT featured in 43 written articles. Seals were discussed in 3 live radio interviews from BBC Radio 4’s nature table to Radio Cornwall interviews about seal pups and our Green Recovery Challenge Fund grant. CSGRT took part in 3 high profile TV series including Countryfile and Springwatch earlier in the year and Simon Reeve in Cornwall that was watched by 3 million viewers in November. 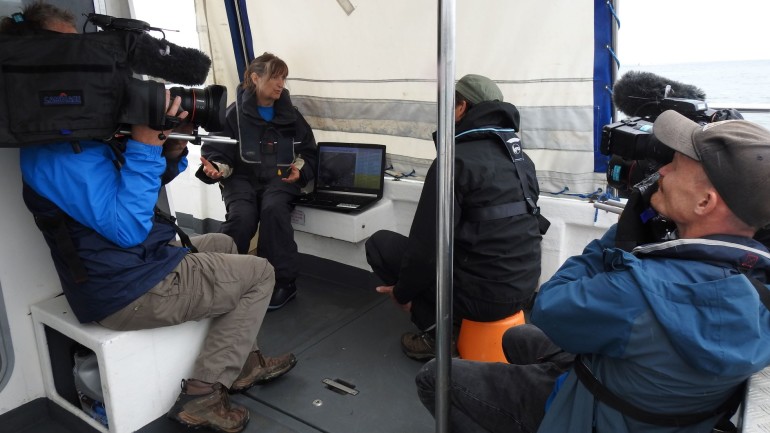 Filming for the Simon Reeve in Cornwall documentary

The beauty of long-term data sets is that you can begin to spot changes. Phenology shifts appear to be taking place in the seal world. Peak haul out season for seals is now earlier moving from April in 2013/14 to March (for 5 years) to Feb (for 2 years) and even Jan and Dec (for 1 year each). Likewise, the pupping season, that used to peak in October, has moved to September for the last 2 years and is shorter and more compressed than it used to be. Alongside this, seals have started using apparently new haul outs not previously recorded by CSGRT on the Lizard and at West Cornwall, whilst haul outs have shifted from one side of the headland to the other on the Roseland.

Some sealy highlights from our photo ID work:

BRF20 ‘Tulip place holder’, who has an extremely swollen and blind right eye has actually survived in this condition since 2012 – she seems to spend the summer in the Fal or on the Lizard, and the winter on the Roseland haul out.

Looe’s LF8 ‘Lucille’ amazed us all by hauling out in Brixham! She now links south Devon to north Cornwall where she was identified in 2017. 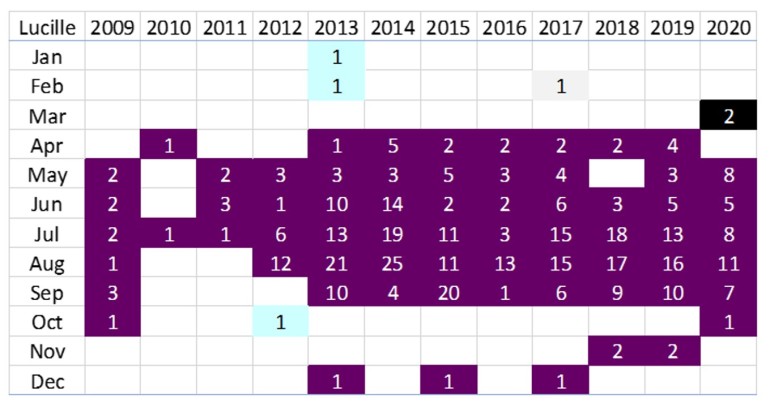 Tagged seal RSPCA’s Wookey was photographed hauled out in north Devon. In December, he became our first link between north Devon and the Gower.

S161 ‘Crosscomb’ put in an appearance in a blowhole rockpool in the middle of the West Cornwall wave cut platform…she is the only seal we have ever seen access this pool from underwater.

A seal was recorded behaving strangely in September by the Padstow Ferry Skipper in the River Camel and to our amazement this turned out to be BRX4 ‘Flower’ from south Devon – behaving normally for her. She swam the 300km minimum distance back to Brixham in just 3 days.

LP41 ‘Jenga’ became the first ever ex rehabbed male seal to be recorded mating – his chosen female was S451 ‘Skateboard’.

Our world record breaking mum – S112 ‘Ghost’ was back! We were delighted that she returned to have her 17th pup in 18 years – right on cue. She hung around for 24 days – a good sign for her pup!

Taggies provide invaluable information as they can be accurately aged and LP123 ‘Ugg’ and LP228 ‘Orion’ revealed that older seals are not always longer/bigger.

LIZ35 ’Quaver star’ put in her occasional visit at West Cornwall, although she seemed to have a respiratory infection.

Sadly LP182 ‘Stinkweed’ (an ex RSPCA taggie) was found dead at Hayle – another adult male to die in his prime – 11 years old – RIP.

More taggie news came as Andrea identified a second Mallydams seal called LP649 ‘Panda’ at West Cornwall, which was the first ever link between the Gower and Cornwall. 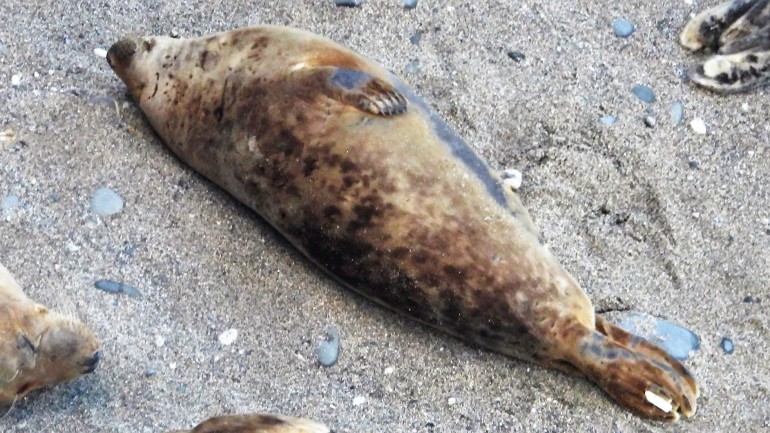 We continue to learn that there is no such thing as an average seal…like us, they are all doing their own individual thing. They know what they are doing – we just haven’t caught up yet. Our photo identification work continues to demonstrate how far our seals swim and how much they depend on joined up and protected coastal habitat.

Our photo ID work has helped us to realise just how complicated seal society is and the impacts we are all having on their health and welfare.

Massive thanks to all our volunteers across our Wales, Somerset, Devon, Cornwall, Dorset and Hampshire network, who make these incredible discoveries possible. This huge team effort makes our globally rare grey seals the most intensively studied in the world.

We are looking forward to an exciting 2021 thanks to a generous grant from DEFRA via the National Lottery Heritage Fund called the Green Recovery Challenge Fund.