As many of you will know, a walrus appeared on Cornwall’s north coast and has been present in the Isles of Scilly since mid-June, an exceptional first record of this species here. 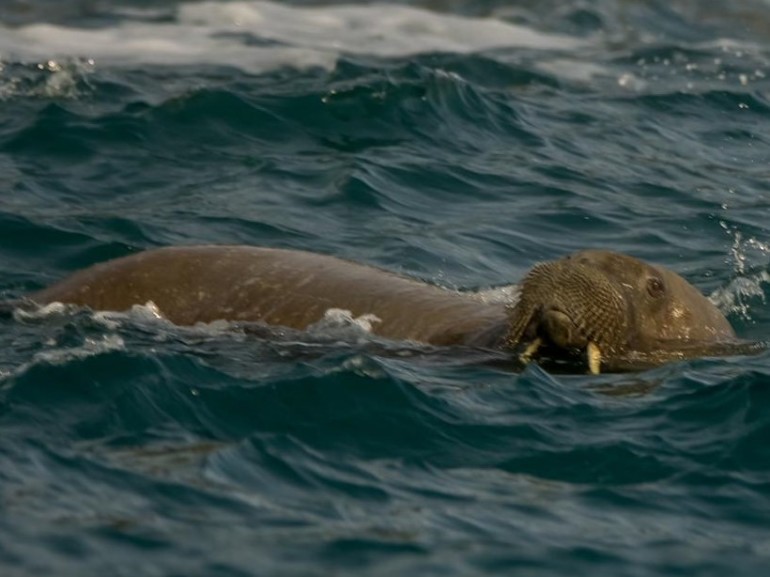 Walrus in the Cornwall (All photos thanks to Nathaniel Barry)

Unfortunately, his presence in a commercial harbour within an island community is posing huge risks, first to himself, and to livelihoods but potentially human safety. He may prevent emergency response vessels from being immediately operational or cause serious injury or worse if he capsizes a boat with people on board. He has also caused thousands of pounds worth of damage.

As such, with his best interests in mind, boat owners and visitors are being strongly advised by the Harbour Master to take preventative action to stop the walrus from hauling out on vessels by blocking access with temporary barriers and obstructions. As a community, in conjunction with local and international authorities and experts, it has been decided that he needs to be discouraged from being in the harbour to prevent his own injury and further damage and risk to people and property. Therefore, over the next few days and weeks, people should expect to see a variety of approved, non-contact humane deterrent methods being progressively and systematically employed.
This is a dynamic situation. The welfare of the animal and the safety of people are paramount. It is hoped that by discouraging him from being around the inhabited islands, he will choose a more secluded wild site, and that he will soon be rested enough to continue back north to his native Arctic.

FAQs
Why is the walrus here?
The walrus has travelled 4000km along the coast of western Europe over the last four months. We don’t know why he is here, but factors could include climate change or that he is simply a lone, pre-breeding male. He is about four years old and it is very likely that he swam to Europe of his own accord.

Can we relocate him, to another part of the UK or back to the Arctic?
For an apparently healthy animal, physical capture (e.g. sedation) and relocation is not warranted. It is an extremely difficult and potentially dangerous option for the walrus and for any handlers involved, especially considering there are no options for even temporary housing in the UK.

How will you be deterring the walrus from being in the harbour?
We have sought advice and support from experts and authorities across the UK and Alaska, France and Norway. We are investigating various methods which will be systematically trialled to see what is effective. In Tenby, Wales, he reacted to airhorns to move him off the RNLI Lifeboat slipway, but he became used to these.

How can I prevent the walrus from getting on board my boat?
Due to being fed from a boat in continental Europe, the walrus is not afraid of trying to board occupied vessels. If the walrus approaches and tries to haul out on your vessel, then discourage him from getting on board. This would not be classed as disturbance as you are protecting your property and yourself. You can equally discourage him off if he is onboard already. Passive, non-contact techniques should be employed including temporary barriers or paddles. Take steps to physically prevent access when you are not on board or by moving boats to a place he cannot access. Make the sides of boats higher with tenders, oars and kayaks, and block low entryways. Check for his presence near your boat before coming ashore in small boats, punts or tenders.

How can I safely and responsibly watch the walrus?
It is understandable that people are loving watching the walrus; however, please remember that he is protected under the Wildlife and Countryside Act (1981) and potentially dangerous. If the walrus is hauled out on rocks, swimming at sea or undisturbed on a boat, then people should not approach him in boats, kayaks, SUPs or swimming. We recommend using the Watching Wildlife Well guidance, keeping at least 50m away in the harbour and 100m away elsewhere, wherever possible. Intentional disturbance, e.g. actively changing his behaviour, interrupting his feeding or unwarranted disturbance is illegal and puts you at risk. Approaching him (even if he looks like he is sleeping) may not help us persuade him to move on.

Can I help monitor the walrus?
Yes! If you would like to volunteer to help observe the walrus when some of the deterrent methods are being employed, please email [email protected]

Huge thanks for the generous grant from DEFRA via the National Lottery Heritage Fund called the Green Recovery Challenge Fund.  This is supporting CSGRT’s Rangers in 2021. The appearance of a walrus has again enabled us to explore the potential of stakeholder collaboration and the role this can plan in marine mammal disturbance mitigation.