As an evidence based conservation charity, CSGRT are keen to share research findings as widely as possible. Since the end of October, CSGRT has gone global reinforcing our key messages three times!

On 28/10/17 Elizabeth Hogan from World Animal Protection invited Sue Sayer to attend the Society of Marine Mammlology conference in Halifax Nova Scotia to chair a photo ID seminar during a pinniped rescue workshop. To save the air miles, Sue agreed to present CSGRT’s photo ID system and methods via a specially commissioned short film ‘Every seal counts’ made by Muddy Duck Productions. The film outlines CSGRT’s photo ID process from surveying through to storing IDs to enable retrospective independent verification. CSGRT aim to use this photo ID film in 2018 to train volunteers across the southwest, so we hope everyone will get to see ‘Every seal counts’, which was described as ‘outstanding’ by Elizabeth. 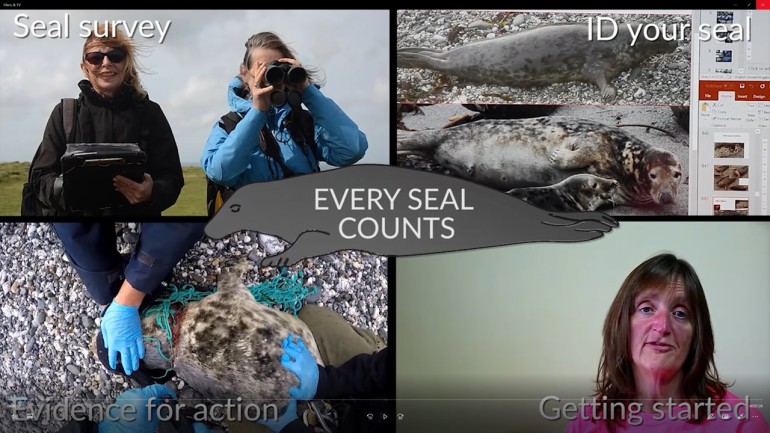 Opening sequence from ‘Every seal counts’ by Muddy Duck Productions

The latest edition of Pinniped Entanglement Group Newsletter has just been circulated to over 70 members from eight countries including Australia, Canada, Mexico, Peru, Russia, the UK and the USA. This autumn, the newsletter featured an article about the successful rescue of juvenile male grey seal ‘Lucky Flipper’ by British Divers Marine Life Rescue, the Cornish Seal Sanctuary and CSGRT. Other amazing stories included the rescue of four Australian fur seals by the Penguin Foundation, two Stella Sea Lions rescued by the Alaskan Department of Fish and Game and Stella Sea Lion disentanglements in Russia. Additional news described the inspiring educational work being done around the world to communicate PEG’s key messages of ‘lose the loop’, ‘stash the trash’ and ‘refuse single use’! 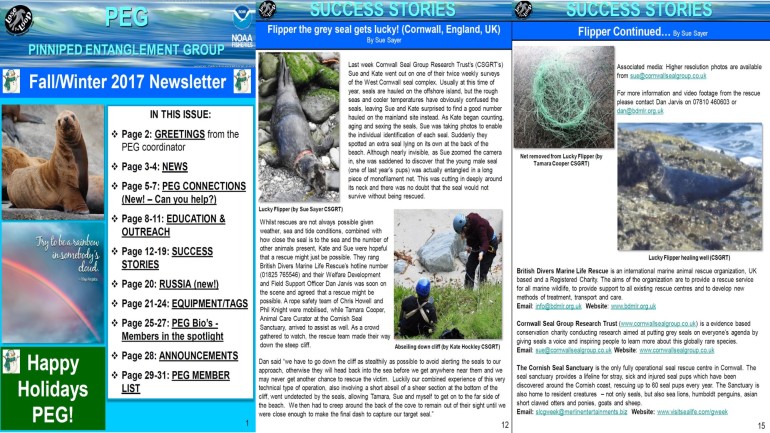 Sample pages from the PEG Newsletter

Kim, the PEG newsletter editor, very kindly sent us some lovely feedback about the work we do because of our love for seals.

“I would like to say how much I appreciate Sue Sayer of the Cornwall Seal Group Research Trust (CSGRT).  Sue and her team, as well as Dan Jarvis and the British Divers Marine Life Rescue (BDMLR) always go the extra mile to help seals found entangled in fishing gear.  Not only does Sue and her team risk life and limb to climb down steep cliffs to rescue entangled seals, but they also clean up the beaches to remove litter that could either entangle or be ingested by another marine animal.  Sue has always been very responsive whenever I have had a question or a request.  We all have a better world to live in because of Sue and the dedicated teams at CSGRT and BDMLR.  It takes a village to clean up our oceans and I am so honored to know Sue and Dan and I am so appreciative of all that they do for the seals, the ocean, and this planet.”

Kim’s comments made us smile a lot and we are very proud to be able to do our bit! Thank you Kim – the feeling is mutual! It is an honour to be members of such an amazing network of people driven by a shared passion for marine life.

In December, CSGRT presented a summary of the amazing work done by our volunteers recording ghost gear in 2015/16. Written by lead volunteer and ghost gear data manager Kate Williams, our latest report will be available to download very soon. Global Ghost Gear Initiative (GGGI) members  (from Australia, Canada, Chile, Italy, Spain and the USA) were invited to participate in a biannual webinar where CSGRT’s Sue Sayer presented a summary of our headline findings. Early indications suggest that the massive collaborative clean up efforts by multiple organisations across the southwest UK is beginning to have an impact – reducing ghost gear and the risks posed to our marine life. 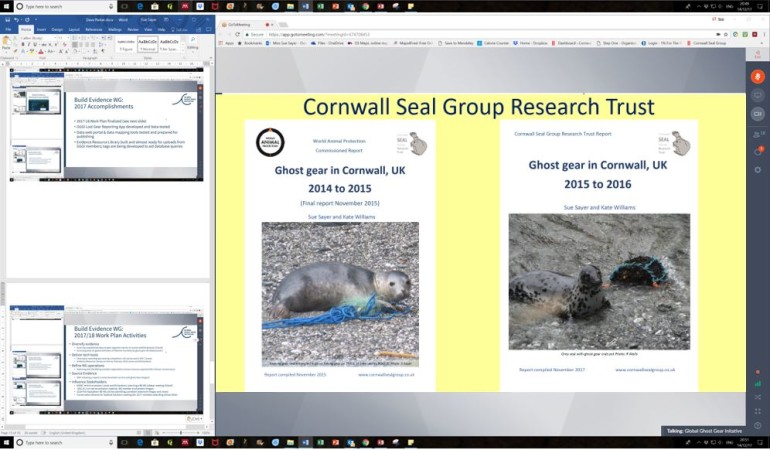 Screen grab during the GGGI webinar

Huge thanks to all our amazing team of volunteers who spend thousands of hours making these presentations possible for the ultimate benefit of our globally rare grey seals.