Facts
There are more harbour porpoise (228K) in southern North Sea than grey seals in the entire UK (153K SCOS 2019)
There are the more BNDs (600K) than grey seals in the world (450K SCOS 2019)
Why protect harbour porpoise and bottlenose dolphins from disturbance and not our two native seal species
The UK has 34% of world’s grey seal population (down from 50% in last 20 years) and 30% of the European sub population of harbour seals.

Whilst it is illegal to disturb a whale or dolphin, it is not illegal to disturb a seal around the English and Welsh coastline, despite seals being considerably more vulnerable when resting on land. Data shows seal disturbance is a big issue, but it is easy, quick and cheap to solve through awareness raising and legislation.

DATA TICK. CSGRT have the baseline data to show this is a critical issue and to measure any success against
AWARENESS TICK. The Seal Alliance have an excellent government backed ‘Give Seals Space’ awareness raising campaign up and running
LEGISLATION – WORK IN PROGRESS. Now we need ‘fit for purpose’ legislation to back this up

Please check out the recently created parliamentary petition to protect seals from disturbance in England and Wales. CSGRT are working behind the scenes with various NGO’s and statutory agencies to explore possible options for achieving better protection, but to get anywhere this petition needs 10,000 signatures minimum. 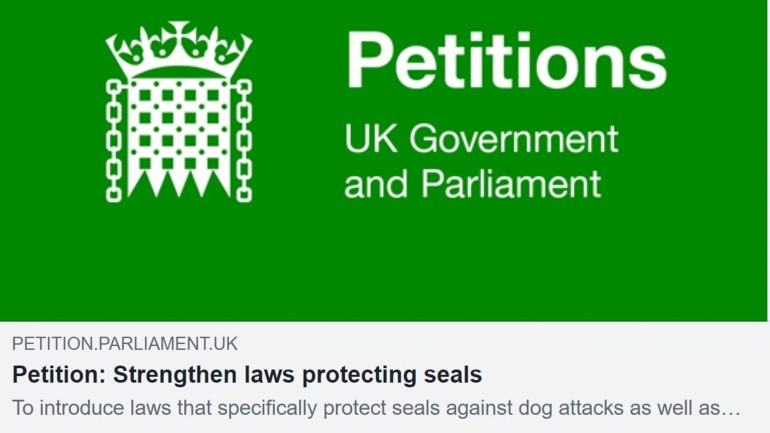 Alongside the petition, there is an Early Day Motion (EDM) to collect MP support too. Please write to your constituency MP to ask them to consider signing this EDM. Click here for some sample content for a letter that you can make you own.

Scotland’s devolved administration have lead the way and designated 194 haul-out sites for seals in 2017 making it an offence to intentionally or recklessly disturb a seal. We now need England and Wales to follow suit.

Greater protection is needed now before it is too late. Legislation is required to support the extensive voluntary codes that are actively pursued by volunteer marine networks and NGOs across the UK.

Solving seal disturbance is the easiest, quickest, cheapest issue to solve and would result in a major quick win for all

Thank you to the Thames volunteers for all their hard work to make this petition and the associated Early Day Motion a reality! This petition was initiated as a result of the death of ‘Freddie Mercury’ the seal on the Thames after a dog attack.

Huge thanks for the generous grant from DEFRA via the National Lottery Heritage Fund called the Green Recovery Challenge Fund.  This is supporting CSGRT’s Rangers in 2021 and helping us to gather momentum to leave a lasting legacy for seals by better protecting them from disturbance.